You are here: Home / King 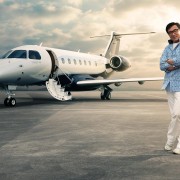 The great invention of the first successful aircraft was made in 1905 by the American Wright brothers. Since then different aircrafts of all shapes, sizes and prices have been manufactured.

Learjet has been one of the manufacturers of business and private jets. It has been referred as a builder of his own kind and class, ruling the sky as the lion rules the jungle, “King of the Sky”.

Learjet was founded back in the 1950s by William Powell Lear and manufactured by an American industry of jets’ business. Learjet remains to be amongst the first manufacturers of private jets. The idea of building business jets originated from Swiss P-16 aircraft which was an American military aircraft by Bill Lear with his team, thus laid a foundation of Learjet. This led to the formation of Swiss American Aircraft Corporation which is located in Altenhein, Switzerland and comprises of design engineers from Britain, Switzerland and also Germany. Learjet was initially to be called SAAC-23 or Tina jet. Although the establishment was laid in Switzerland, it was relocated to Wichita, Kansas in the year 1962. This is because Kansas had many skilled workers in aircraft techniques and still there were other aircraft companies. In 1963, that’s when the first Learjet was assembled, and the following year the company was named as Lear Jet Corporation.

The first Learjet was similar to the fighter prototypes except for the landing gears and the wings which were designed slightly different from the original American military aircraft. The first Learjet 35 was flown when Lear Jet Corporation was merged with Gates Rubber Company of Denver in the year 1967, thus forming gates Learjet Corporation. This strong jet namely Learjet 35, made the company to be awarded an award called president’s “Award meant to promote export sales.

In 1977, a new aircraft called Learjet 28 fitted with new wings known as winglets were launched. It had improved performance while saving the fuel used thus nicknamed “Longhorn.” A Bombardier Learjet was then made since 1990. This is when the company in Canada called Bombardier Aerospace acquired the Learjet Corporation and sold the jets as ‘Bombardier Learjet Family.’

The first product of this company was Learjet 60 on October 10 the same year, followed by Learjet 45 on October 7, 1995. The Bombardier Learjet made a new program for making aircraft called Learjet 85. It was larger with longer range and faster than any other Learjet carried out before. But it canceled the Learjet program on October 28, 2015.

Get an instant quote